Humanizing the Voices of our Times with Cameron Blake 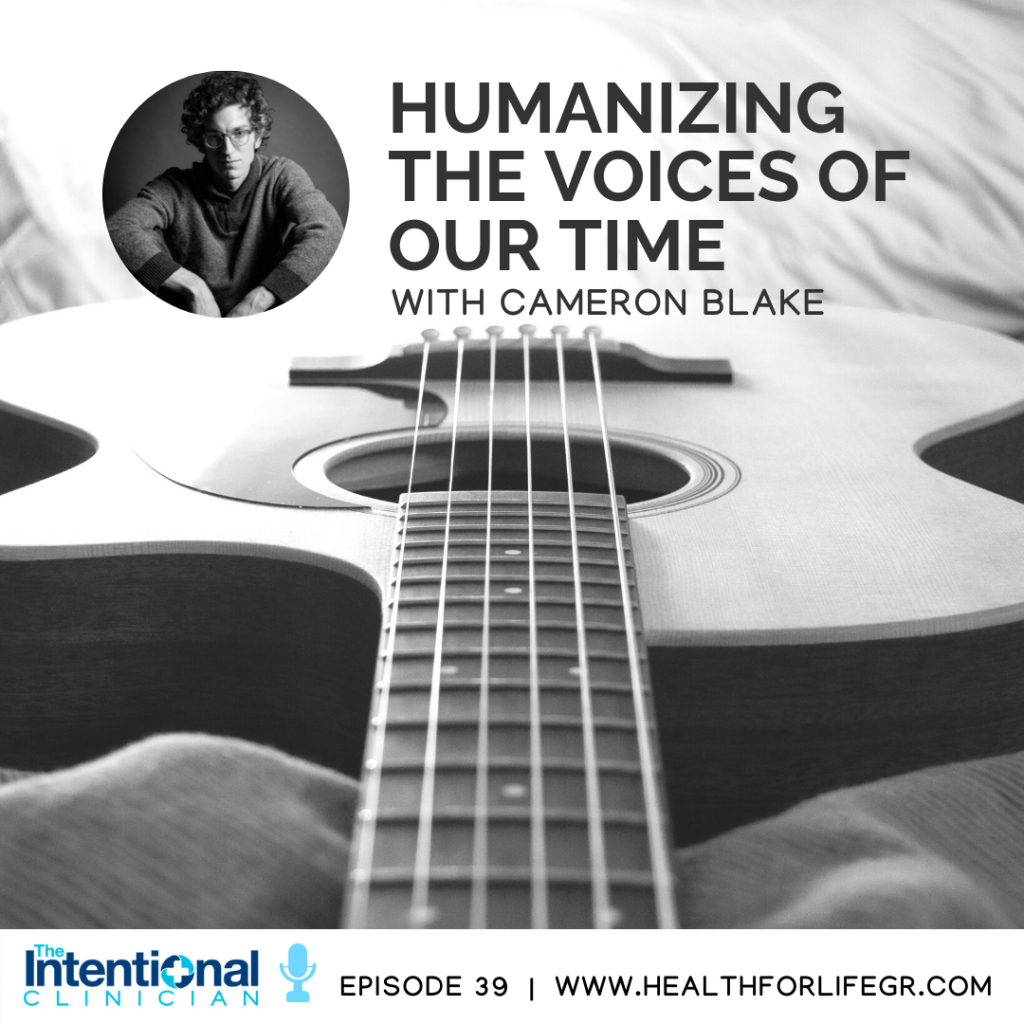 [Episode 39 of the Intentional Clinician]

Paul Krauss MA LPC sits down with singer-songwriter Cameron Blake to discuss songwriting in a way that humanizes the voices and stories of the times we live in. After hearing Cameron’s performance in Grand Rapids, MI, Paul wanted to interview him for the podcast. Cameron’s music is a lively mix of genres combined with thoughtful, stimulating lyrics. Personal loss led to Cameron’s self-reflection which helped him produce provocative lyrics and songs.

Cameron views his role as an artist as important in bringing up difficult issues. Rather than simplifying or even glorifying darkness in the world, there is value in exploring what these events mean. Thinking about these issues can increase our empathy. Emotions that come up during this process come out through Cameron’s lively and engaging performances.

Performances have been limited to Grand Rapids lately, but Cameron believes his music will reach those who need to hear it. His songs’ topics range from the pain of a lonely person to economic ruin and redemption and cover such topics as Greta Thunberg, the Syrian conflict, and eating the entire chicken(bones and all). Cameron ends with a reminder that silence in our lives is the key to producing meaningful reflection and sensitive change.

Michigan-born Cameron Blake is most passionate about engaging with the parts of us that are fragile and vulnerable. This is reflected most deeply in his songs, which have touched the hearts of people all over the world. Ranging from gospel-fired, high energy roots rock to introspective folk, Cameron’s music is as diverse as his personal story. He began composing and playing the violin at the age of twelve; a talent that would eventually culminate in a Master’s Degree from the Peabody Institute of Music in Baltimore. Compassion, curiosity and a fair share of burnout took him beyond the walls of the practice room and out on the street, where he regularly worked and communed with the poor. Sharing what he experienced was the starting point for a new career path as a singer-songwriter. He taught himself piano and guitar, quickly immersed himself in the Baltimore music scene and took his individual brand of chamber folk on the road.

After meeting the love of his life and moving back to Michigan to raise a family, Cameron’s artistry bloomed into full maturity with the release of Alone On The World Stage (2015). Recorded with nothing more than voice, guitar, and occasional piano, the record garnered international acclaim for its subject matter; a heart-rending, poetic and poignant picture of the issues that face the world we live in today. His keen eye for detail and skill for getting inside of characters to reveal flesh and blood human lives continued with the release of Fear Not (2017); a lush, masterfully orchestrated album that tackles the complex subject of fear. The album has earned praise from the likes of The Huffington Post, No Depression and Paste in the US and was released throughout Europe on the Netherlands based record label Continental Song City in 2018.

If you’ve seen him before, you know that Cameron’s performances leave a lasting, emotional impact.  Whether it’s performing as a frontman or a soloist, in a sold-out amphitheater or an intimate club, Cameron gives himself fully to his audience.  Described as “brilliant” (Baltimore City Paper), “impressive” (Local Spins) and “beautiful” (Washington Times), Cameron’s soulful baritone voice, powerful lyrics, and physical presence make him one of Michigan’s most original and compelling live performers.