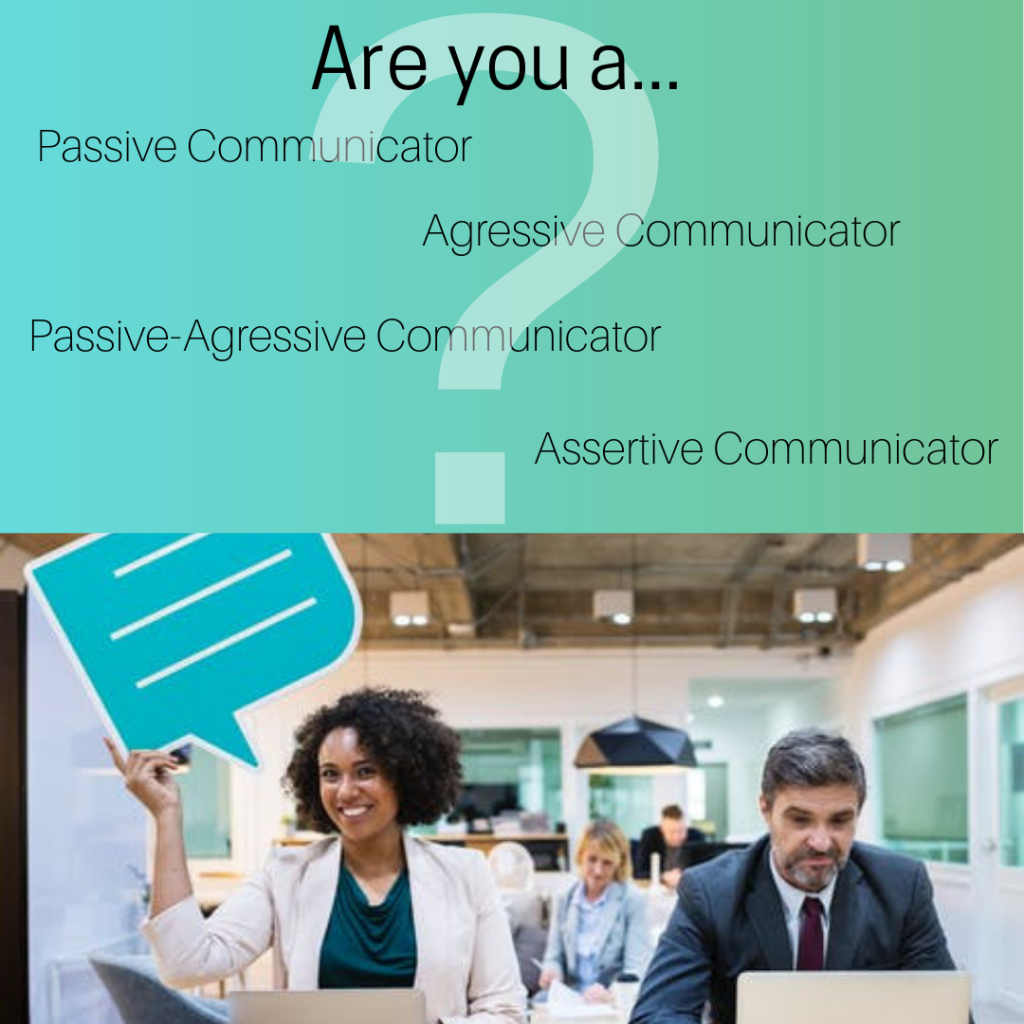 Have you ever found yourself wondering why other’s don’t talk the way you do?  Have you ever found yourself saying, “If they just talked this way, we would have such a easier time talking.”   Well today I hope this blog can answer some of your long burning questions about the way human beings interact, as today, we are focusing on communication styles!  While not an actual science, through the years of social studies, social workers and psychologists alike have come to understand that there are about 4 primary styles of communication that people utilize for one reason or another (Alvernia University, 2018).  These four styles consist of: passive, aggressive, passive-aggressive, and assertive.

Lets start by looking at the first style: passive.  The passive style of communication is all about not “rocking the boat.”  A person who utilizes a passive style will often seek to maintain the status quo of a conversation in order to avoid confrontation or upsetting the other individuals in the conversation.  These individuals may regularly deny their own needs, opinions, and instead chose to support the beliefs of others in order to feel safe or secure in their relationships, or even physically safe when engaging with stranger.  Passive communicators will regularly be unaware that their needs are not being met, and will often become resentful, depressed, anxious, or even infuriated due to this (UK Violence Intervention and Prevention Center, Unknown).  If you find yourself saying phrases like “Whatever you want,” “I don’t really mind what we do,” or “Oh he/she/they didn’t really mean what they said,” then you’re likely a passive communicator.

For our third style, we see a mix of the previous two styles: the passive-aggressive style.  These individuals normally find themselves unable to directly engage with the sources of their frustrations, either due to being less powerful than the other or maybe even that it would be inappropriate (culturally or situationally) for them to express their feelings/thoughts.  As such, passive-aggressive communicators are normally acutely aware of their needs, but will often express them as underhanded or secondary comments. These communicators regularly display two communication messages at the same time, such as laughing after complaining about something someone has done or frowning when saying that they appreciate something, and can often lead to confusing the other individual.  If you’ve found yourself using phrases such as “Sure lets do that! (said aloud) Even though my idea was better (muttered under your breath),” “We can try it that way, but people aren’t going to like that,” or even “Oh I love this gift! (While rolling your eyes or frowning),” then you may be a passive-aggressive communicator.

Finally, our last style is the assertive style.  Traditionally, this style is seen as the most effective style of communication, as the individual that utilizes this style is able to communicate their thoughts, opinions, feelings, and needs to others while also holding the space for others to communicate to them.  Assertive communicators have a firm understanding of their own thoughts, feelings, and beliefs, and communicate them effectively to others, while also recognizing that other people hold their own thoughts, feelings, and beliefs. Assertive communicators are often able to express their needs while also engaging others to do so as well.  If you’ve ever found yourself saying phrases such as “This is what I’m thinking (insert thoughts), but I’d like to hear what you have to say as well,” “I’d really like to do this; what would you like to do?” or even “Well I guess we just have different opinions on that, and that’s ok,” then you’re likely an assertive communicator.

There you have it, the four styles of communication.  Now if you have found yourself in one of the communication styles that you particularly don’t enjoy, don’t worry!  Communication styles, much like personality styles, are malleable, which is just a fancy way of saying they can change!  In our next blog post, we’ll be going over one of the methods you can improve your communications styles, ensuring you are more effectively heard as well as giving space for others to communicate with you!  In the meantime, if you’re interested in learning more about what makes you the way you are, as well as why you may communicate the way you, feel free to set up a complimentary 15 minute phone consultation with me.  Together, we can help you develop into the best “you” you can be!