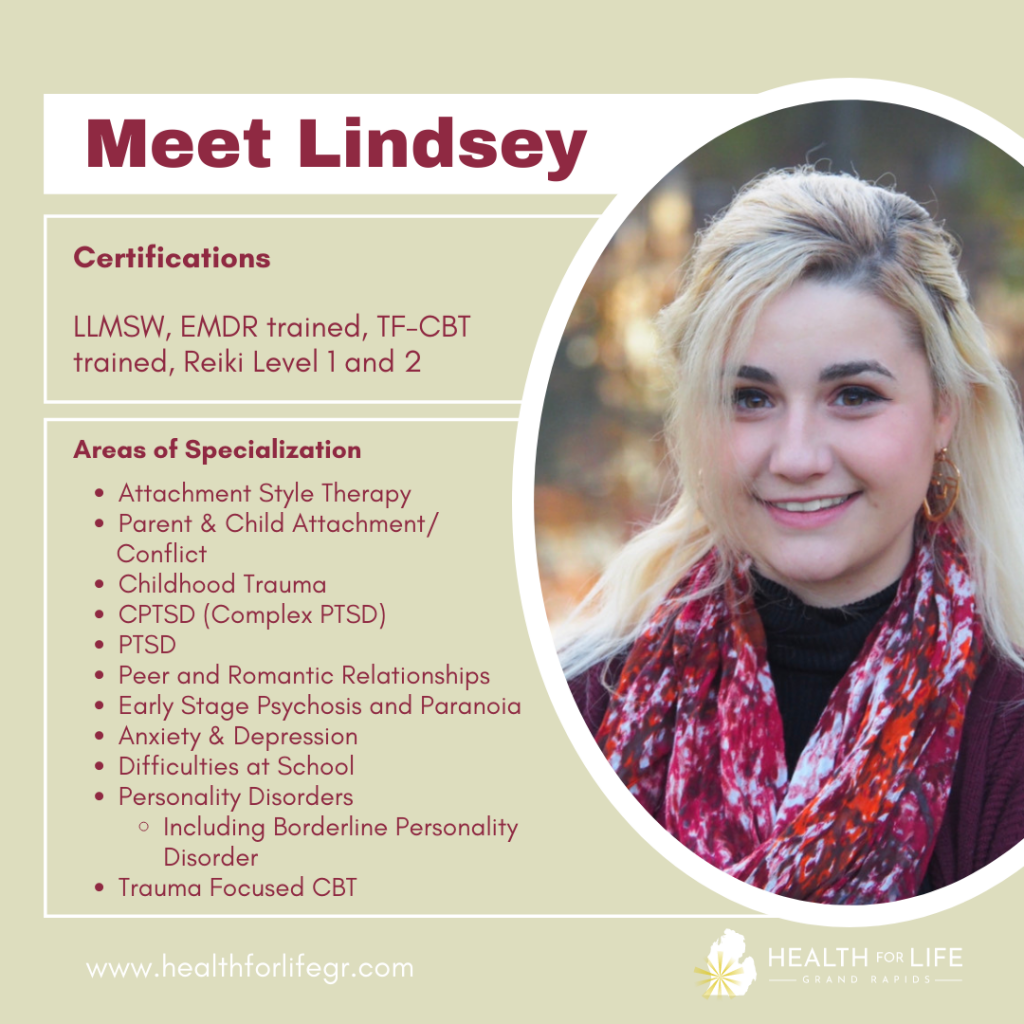 Lindsey Beaver is a limited license social worker (LLMSW) located in Grand Rapids, MI. She completed her bachelor’s degree in psychology with a double major from the Residential College in the Arts and Humanities from Michigan State University. After her undergraduate degree, Lindsey worked as a crisis counselor for Americans experiencing mental illness, loneliness, trauma from physical verbal or sexual abuse, symptoms of psychotic disorders such as schizophrenia, and many other obstacles. She also spent time learning about early childhood development and the HighScope Curriculum as a preschool teacher, and also worked as an assistant coordinator at a service learning and civic engagement program with high school students.

During her master’s program, Lindsey completed two field placements. In the first, she honed in on her extensive experience with children by doing home-based therapy with youth ages four to seventeen who had experienced trauma, or were currently experiencing trauma. She was then placed at the University of Michigan’s Partial Hospitalization Program where she gained additional experience with adults suffering from severe mood disorders such as anxiety and depression, as well as personality disorders such as Borderline Personality Disorder. She cultivated skills and experience working with patients individually and in group therapy. During her program, she also learned through experience and through trainings about trauma informed systems and resources, especially within school settings. She recently moved from Ann Arbor to Grand Rapids, making the leap into private practice in the Fall of 2020.

In addition to her practice areas cultivated in her graduate program, Lindsey is also interested in the link between trauma and psychosis, and in the development of early stage psychosis, which she has spent an extensive amount of time studying. She is also interested in the link between trauma and the development of personality adaptations meeting the criteria for Borderline Personality Disorder and Narcissistic Personality Disorder. She enjoys working with children, teens and young adults with first episode and persistent mood disorders. She currently accepts Blue Cross Blue Shield, ASR, Straight Medicaid, Blue Cross Complete, Meridian, McLaren, and out of network benefits. In the incoming year, Lindsey will also be providing appointments for Reiki Healing both in person and remotely. While she always adheres to evidence based practice, she believes that the most effective therapy is one that meets the needs of the individual on every level, not just the mental.

In her spare time, Lindsey enjoys taking hikes, being by the water, creative writing and music, meditation, exploring fun new restaurants, and long thoughtful conversations with her friends. She also deeply enjoys investigating her clinical areas of interest in her spare time. She spent most of her life in Ann Arbor, and frequently visits the city that is near and dear to her heart.

Lindsey is currently accepting new clients, and can be reached via phone or email.