Phone addiction: Is it real? What can we do about it? 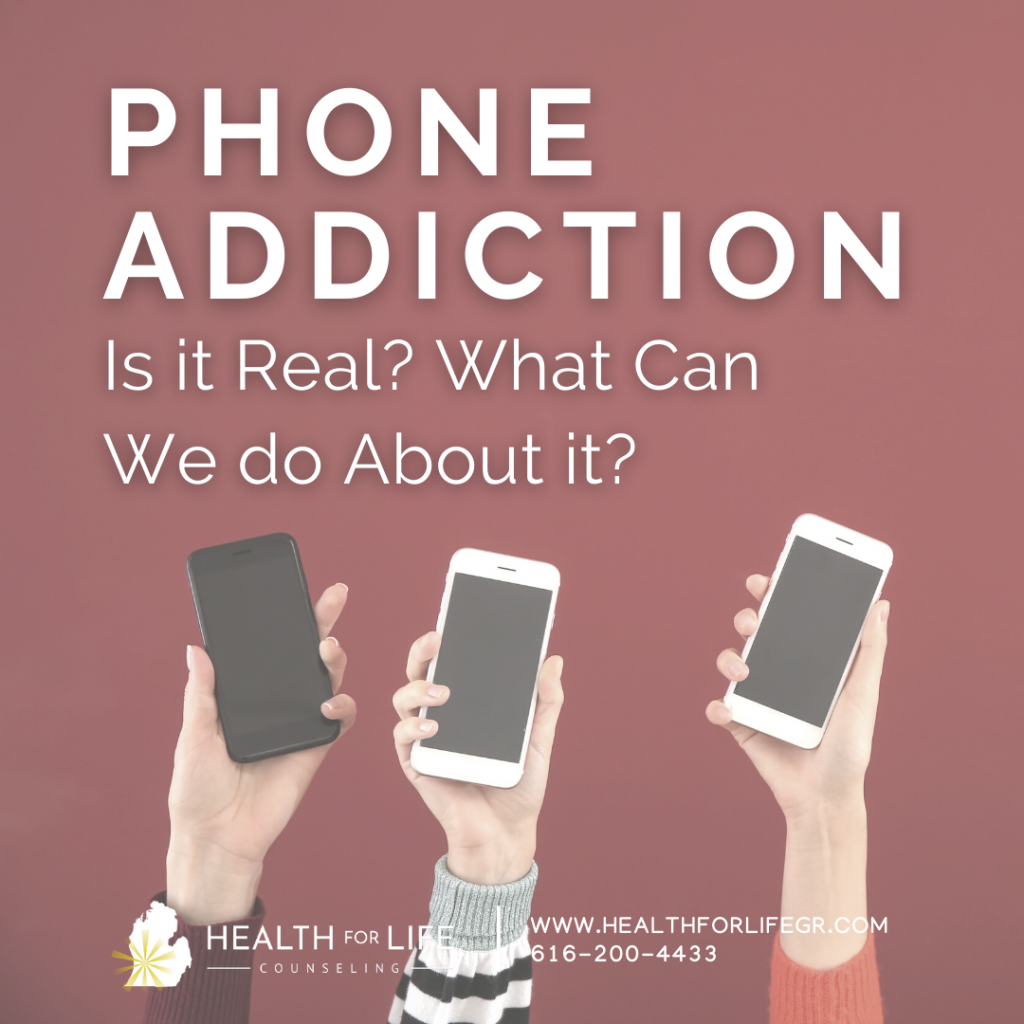 Without a doubt, using smartphones is an integral part of our daily routines. We wake up checking our phones and go to bed with them in our hands. Considering this, it’s not a big surprise that excessive use of cell phones has generated a new form of mental health problem, which is phone addiction.

Yes, smartphones, tablets, and laptops really help us solve various modern problems, but unfortunately, studies prove that compulsive use of phones leads to addiction. In fact, according to Wacks and Weinstein (2021), excessive smartphone use is related to mental, emotional, and even cognitive changes.

So, if you find yourself unable to restrict time in front of a screen or if you notice that scrolling down through social media seriously disrupts your productivity, it’s time to find out more about phone addiction.

In this article, we’ll define phone addiction, explain the symptoms of this mental health issue, and help you identify psychological consequences related to it.

What is Phone Addiction?

Phone addiction is a common mental health issue expressed by the obsessive use of a smartphone. It’s an emotional condition related to impulse-control problems that are also known as “nomophobia,” or the fear of being without a smartphone device. This mental health condition is usually caused by excessive use of smartphones. However, the real reason behind the addiction is the online applications, social media platforms, and games that people compulsively take part in.

Nowadays, there are about 5.11 billion mobile phone users worldwide, and the number is rapidly growing. Since the pandemic and its related consequences, such as online schooling and distance work, using smartphones has become vitally important. This tendency is one of the main reasons why the number of individuals struggling with cell phone addiction has increased in the past years.

Even though phone addiction isn’t officially recognized as a mental health disorder by the DSM-5 (Diagnostic and Statistical Manual of Mental Disorders, 5th Edition), research has already proven that it’s a form of addiction such as substance use disorder or compulsive behaviors such as OCD.

Here are some of the most common symptoms and signs of phone addiction:

A person with a phone addiction doesn’t need to meet all these criteria, but as studies prove, these are the most frequent signs that might be risk factors for developing an addiction (Shoukat, 2019).

Except for physical conditions such as neck problems and eye fatigue, obsessive phone use is also associated with several negative psychological conditions. In fact, a number of studies prove that constant use of smartphones can negatively impact our emotional condition and result in unhealthy behaviors. For example, based on a 2020 study, phone addiction leads to psychological distress and neuroticism among university students (Yik-Chuan Lei et al., 2020).

The following are some of the most common psychological consequences of excessive phone use:

In a cross-sectional study conducted in the UK in 2021, participants with smartphone addiction had poorer sleep quality compared to those who didn’t use their phones compulsively. Therefore, phone addiction is accompanied by sleep disturbances, including the likelihood of insomnia and decreased sleep quality. The reason can be found in the light emitted by phones that activates the brain and changes sleep patterns. As a result, excessive phone use might lead to different types of sleep problems.

Generally, people with smartphone addiction are vulnerable to developing anxiety and mood disorders such as depression. In particular, they find it hard to fall asleep, which provokes anxiety and makes them fear they won’t get enough rest to function well. Decreased mood, in turn, results in negative emotions such as lack of hope, guilt, or worthlessness that might trigger depression.

Issues related to social relationships are a very natural psychological consequence of phone addiction. Usually, people who obsessively use their phones feel socially isolated. They rarely spend time communicating face-to-face with their loved ones, and as a result, they often feel lonely and isolated.

Besides, smartphone use worsens offline relationships because individuals who spend too much time in front of the screen rarely find time to communicate with others. This often causes reduced quality of relationships.

Excessive phone use also reduces productivity at work, in school, or at home. As the 2017 study shows, average employees who spent 56 minutes per day using their cell phones tended to be less productive compared with other employees. This can be caused by the worsening functioning of the brain and the inability to focus attention on tasks.

What To Do About It

Although reducing the use of your phone may not be easy if you’ve already developed a phone addiction, there are some things you can do to change your unhealthy behavior, feel better, and improve your quality of life.

Get Help From Professionals

If these signs and symptoms of phone addiction seem familiar to you, try to consider our tips and break down the unhealthy use of your smartphone. However, sometimes this compulsive behavior makes it hard to reduce smartphone use on your own. If that’s the case, don’t be afraid to contact our therapists at Health for Life Counseling Grand Rapids. They will help you identify your problem and develop adaptive coping strategies to deal with it.