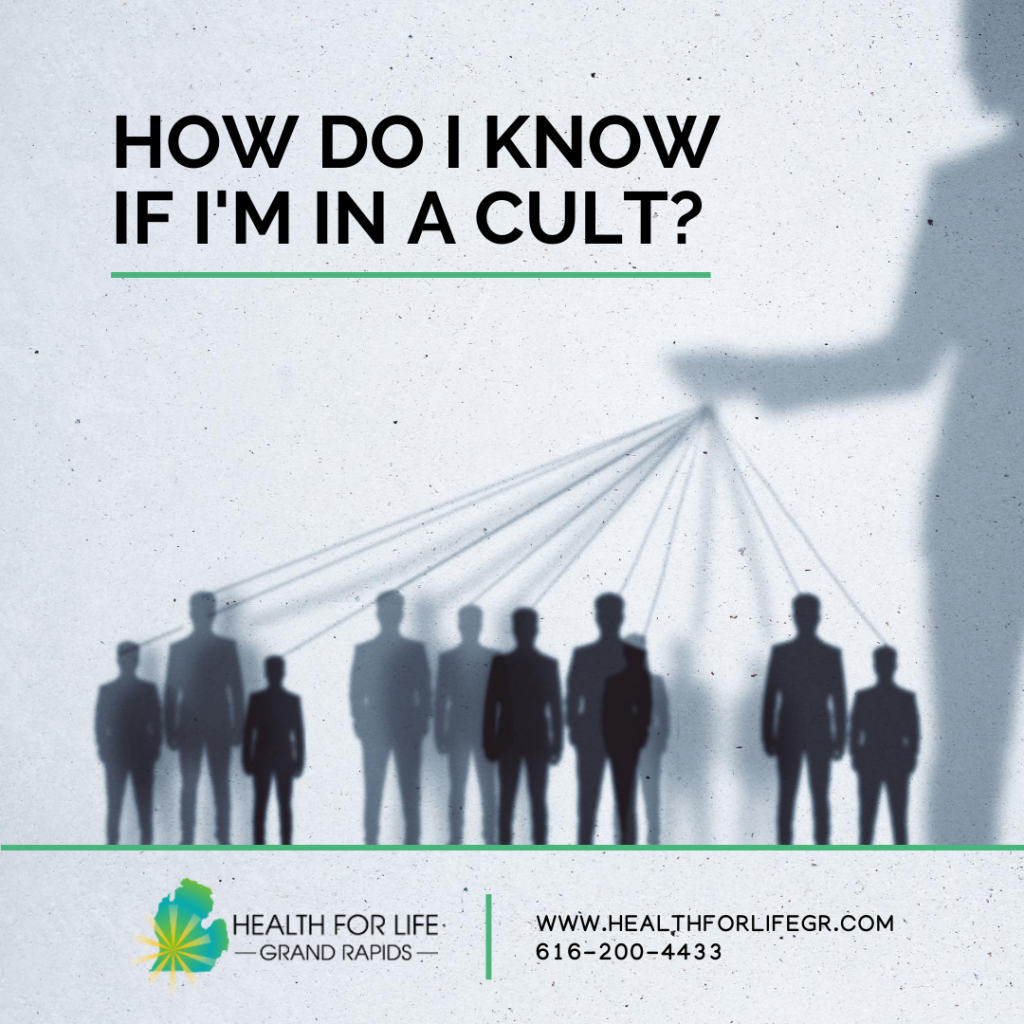 When you think about cults, things like Heaven’s Gate or the Branch Davidians or the way North Koreans venerate Kim Jong-Un come to mind. We don’t expect to get caught up in one ourselves in West Michigan, or the United States period. That’s something that happens “over there” or to “those people”. However, cults in the United States are more common than you would expect.

Religious group International House of Prayer identifies seven behaviors as being significant signs a group is a cult.

Let’s break these down. Opposing critical thinking is very common in religious cults in the form of schooling their young children. Religious groups often push homeschooling on their members, or at the very least, religious schools. These groups often utilize homeschooling as a way of only teaching what the church would like the next generation to know and do not teach critical thinking skills so the kids cannot argue back against the only things they have been taught.

Isolating members and penalizing them for leaving is very common in religious cults. Think of “shunning” that some Amish communities practice, or in some religious circles that disown family members who identify as LGBT+ and refuse to communicate with them after they have come out. This fear of being cut off from your family and friends is hard to overcome, and may be the biggest tool that cults use to keep their people in. Humans are by nature social creatures, and being cast out and having to make it on your own is incredibly traumatizing.

This can go hand in hand with Dishonoring the family unit. If you happen to be in the cult, and your family is not, you will be told to shun your family members. You will be told that your family doesn’t believe like you do, and thus you cannot see them anymore else they pull you away from the one true way of following God. Individuals then are more dependent on the cult group and it’s even more difficult to leave.

Crossing Biblical boundaries of behavior (versus sexual purity and personal ownership) is common here too, with cult leaders marrying pubescent children or having many wives and encouraging other high-level men to do the same. Religious communities are often set up with a leader that the rest of the population is unable to question, and the grooming of children for sexual abuse is often accompanied by grooming of the children’s family and other members of the community. This community grooming helps the perpetrator have a network of supporters who do not believe the victim if they choose to seek help.

Emphasizing special doctrines outside of “scripture” is harder to identify, as most religions have their own holy texts and view the other religions texts as special doctrines or heretical. That said, this can show up as the leader of the group sharing “a special prophecy from God” that directly goes against something in that religious group’s holy text. Separation from the Church can go hand in hand with this, as the cult group now knows the “truth” and the old Church is wrong, or at least believing the “wrong things”.

We often think of inappropriate loyalty to their leaders in the sense of personality cults, such as what happens in North Korea. This happens in the religious sense when 900 men, women, and children line up to drink poisoned Flavor-Aid because their religious leader tells them to – like we saw in Jonestown in 1978. It’s usually not to this extreme, but think about the last time a religious leader, priest, or pastor was exposed to be mismanaging money, having inappropriate sexual relationships with individuals in the congregation, or going directly against their supposed religious beliefs. Often it’s the whistleblowers that are thrown out, and the person in power was shuttled to a different parish, or got a slap on the wrist and came back to preaching in a few months. The church as a whole tends to excuse the behavior of the leader and things go back to “normal”.

Cults rarely show up like we expect. We think of the sensationalized events, like the Jonestown massacre or the Branch Davidian standoff with the ATF in Waco. If cults tried to recruit saying things like “we’re all going to kill ourselves so we can jump on a spaceship that is hiding behind a comet, but only if we’re wearing specific Nike shoes” no one would join. They’re sneakier than that. We don’t like to think that it’s happening in our own backyards, with our friends and families, and in our religious groups in our hometowns, but it might be. I wonder if you have identified any behaviors in your circles that are red flags that you never noticed before.

If you are in a cult, you may want to seek safety first with friends or relatives.

If you are in a safe place, it may be time to begin the recovery process.

Counseling can be one of the tools by which you may recover.

CRHE. (2013). How Have Scholars Divided Homeschoolers into Groups? Retrieved August 12, 2020, from https://responsiblehomeschooling.org/research/summaries/how-have-scholars-divided-homeschoolers-into-groups/