The Terracentric and Geocosmological: The Ecological Psyche and Types of Relationship to Nature 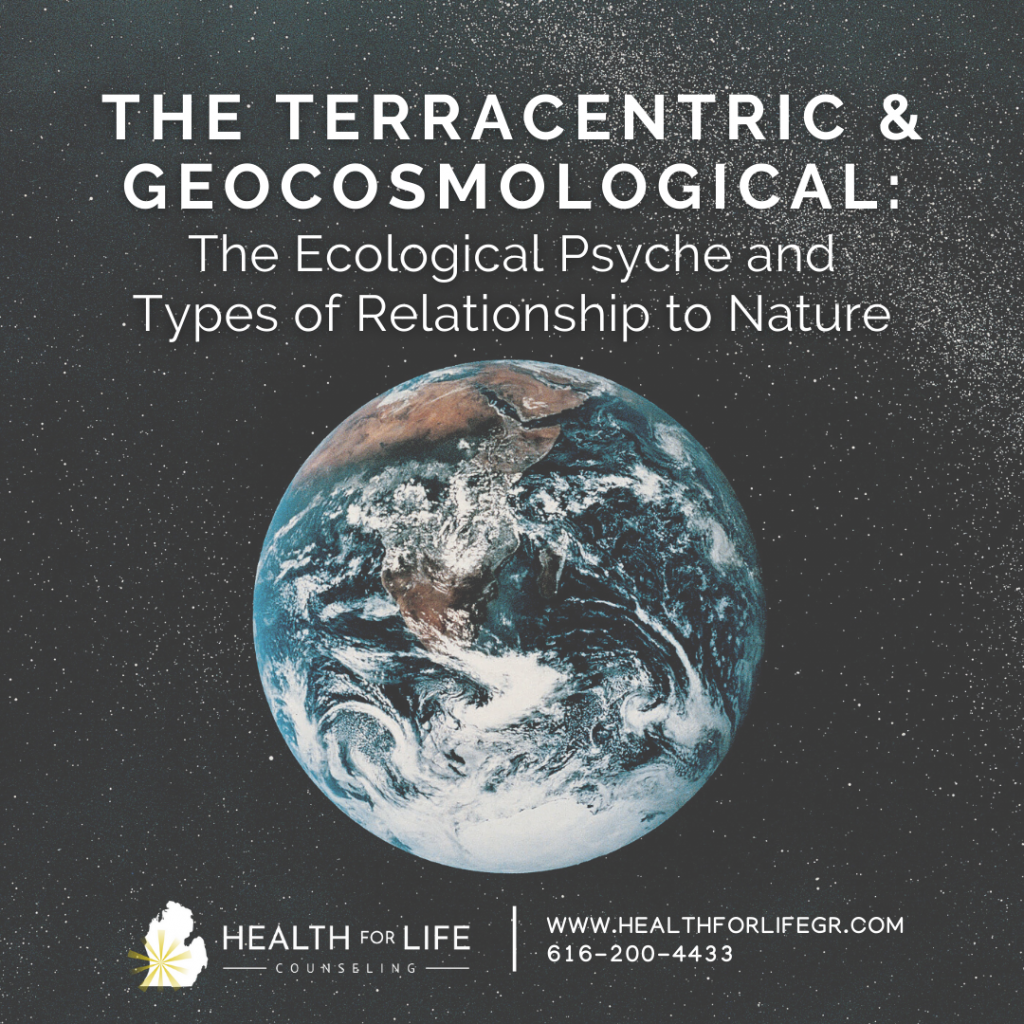 The Earth has shaped us physically, psychologically, and spiritually over thousands of years. Hidden beneath all the layers of modern living, neatly tucked away and almost invisible in an ancient layer of the psyche, is a fundamental aspect of our personal and collective human existence. Behind the smartphones and tablets, the computers, cars, pasta machines, and all the technical gadgets, underneath all of our social, political, and economic issues, beyond even our parents, children, and loved ones is an aspect of our lives that is so fundamental that without it, we would not exist. I am speaking of our relationship to the Earth, much of which is unconscious. While there are many psychological imbalances that pose challenges to our health and wellness in the modern world, according to Theodore Roszak (1992/2001), “the anguish of what I call the ‘ecological unconscious’ has emerged in our time as a deeper imbalance” (p. 13). The root of our psychological health and wellness, from this perspective, is shifted from the expectations of the cultural world to the demands of the ecological psyche and how it relates to the natural world.

Much of our relationship to the Earth is what I call terracentric. When we hear of environmental crises, we feel something—anger, guilt, shame, anxiety, fear. These emotions can become overwhelming, forming a slow traumatic event in our psyche. We often try to keep these kinds of feelings at a distance. We might push them away, rationalize things, or distract ourselves with something else until something happens that triggers them, and we react, often in knee-jerk anger or depression. We might feel called to change our ways of living to reduce our footprint, we might become an environmental activist, volunteer, or strive to change things in some other way. Well-intentioned and absolutely imperative as these things are, it all too often feels like we are nothing but a drop of water in an endless ocean of grief. We become discouraged, hopeless, despondent. Despite our attempts to keep the deep and painful emotions at bay, ecogrief can and does consume us and our effectiveness to make changes is diminished.

The energy of the avoided (repressed) feelings discussed above becomes the unconscious ecological shadow of the conscious psyche and exerts control over our actions. Ecological shadow material is formed in the attempt to avoid through repression undesired feelings of one approach and is then projected onto the other approach, creeping into an ever-darkening collective ecological shadow in dangerous, habitual, and unconscious ways of being on the Earth. Our personal layer of the ecological psyche thus impacts and is impacted by the world. The approach on which the shadow is projected becomes the object of all the repressed material that the projecting ego refuses to acknowledge. Thus, the ecological shadow causes us to remain unaware of our true relationship to the natural world and dictates our emotional state toward the Earth without our permission. This causes the continuation of the exploitative relationship to the Earth and the ecogrief we feel at it to darken even further. Rather than truly confronting the full ecological psyche, modernity has created a collective ecological shadow that expresses itself in compulsive and repetitive addictions, the destructive nature of which becomes apparent when it is seen in environmental crises.