The Danger is in the Details: Understanding Eating Disorders 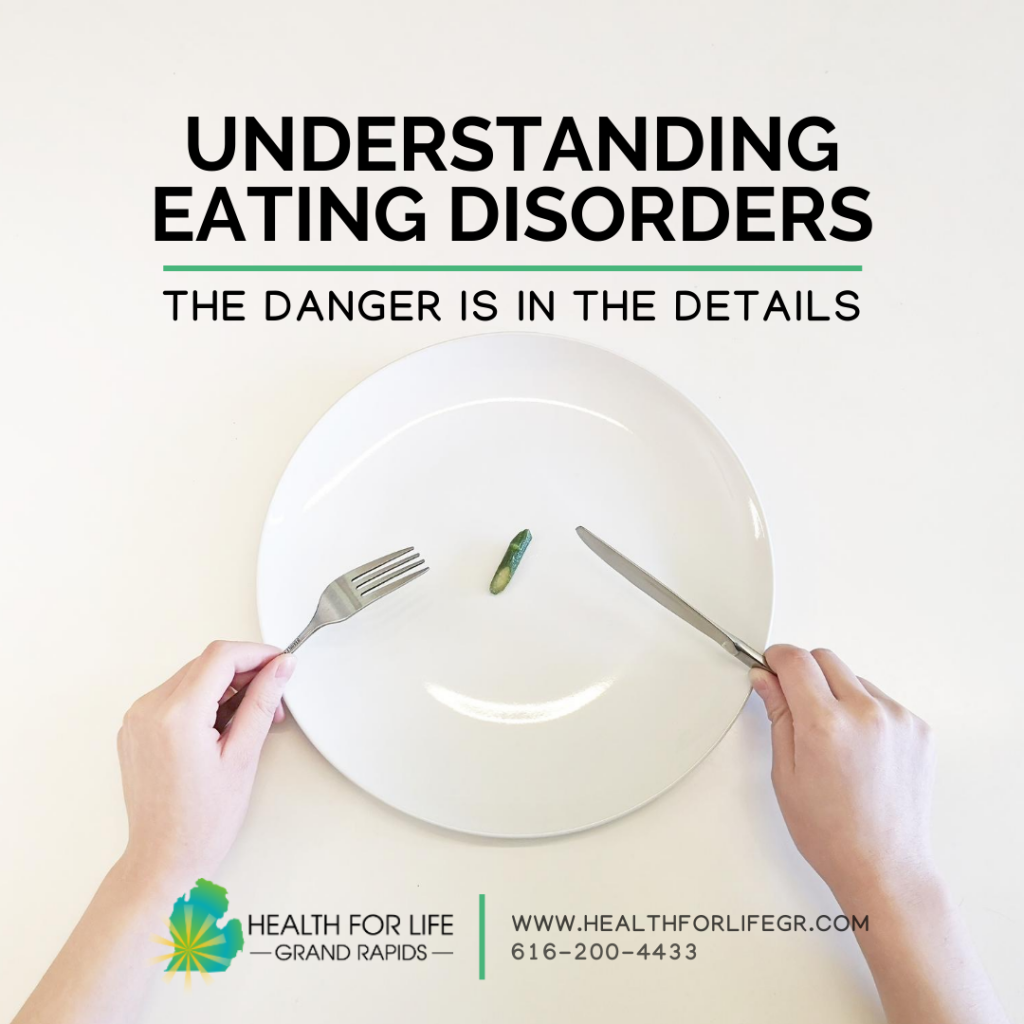 Think about the last time you heard about eating disorders. It may have been in high school health/PE class, or maybe a sitcom having an “eating disorder episode” where everything was all fixed and wrapped up in a bow by the end of the 30 minute episode. Full House anyone? Or maybe you’re old enough to remember the “pro-ana” websites full of “tips and tricks” from the late 90s and early 2000s. The DSM-V (the big book of mental disorders that mental health professionals use) has 7 eating or feeding disorders. Some are well known – Anorexia Nervosa, Bulimia Nervosa, others are not – Pica, Rumination Disorder, Binge Eating Disorder. Let’s talk about the main 4 that you may run into: Anorexia Nervosa (AN), Bulimia Nervosa (BN), Binge-Eating Disorder (BED), and Other Specified Feeding or Eating Disorder (OSFED).

Anorexia Nervosa (AN). You all know this one. This is the stereotype of someone with an eating disorder. DSM-V gives us the following diagnostic criteria – in layman’s terms.

Starvation can have an effect on not only your body, but your brain as well. These effects include: low blood pressure, heart murmurs, dry skin, constipation, osteoporosis, infertility, low blood sugar, respiratory issues, and death. Mentally it can lead to being unable to concentrate and loss of brain matter that can be seen on MRIs, not to mention the co-occurring depression, anxiety, or substance use. AN can be incredibly persistent, and difficult to heal from, and a majority of individuals suffering from AN die, either as a natural outcome from the biological effects of starvation, or by suicide.

Bulimia Nervosa (BN) is less discussed than AN, but is just as dangerous. The DSM-V says this as criteria:

BN is sneakier as individuals do not generally lose weight due to their behaviors. It is rare for individuals to have as low a BMI as someone who is experiencing AN. That said, it leads to a lot of physical health problems that are less discussed. Self-induced vomiting and use of laxatives can lead to electrolyte imbalances that can manifest in heart attacks or seizures. Excessive exercise can lead to overuse injuries. Individuals have lost enamel on their teeth and have torn their esophagus by self-induced vomiting. Overuse of stimulant laxatives can also prevent the large intestine from working properly, increasing the need for more laxatives or otherwise they will no longer be able to defecate. This is not scare tactics, this is the reality of BN.

Binge-Eating Disorder (BED) is very similar to BN, but without the compensatory behaviors. DSM-V says these are the criteria for diagnosis:

BED can lead to adverse health outcomes such as diabetes, hypertension, and sleep problems. Like other eating disorders, BED can carry with it shame and embarrassment and individuals often eat in secret so that people around them cannot see the extent of their binge eating. They also tend to underreport their intake, further adding to a lack of control as it looks to an outsider that they are “doing everything right, exercising, eating a low amount of calories” and still be obese, thus being able to blame their size on something other than their eating behaviors. In a weird turn, BED can also be a result of treatment of a restrictive eating disorder, where the control of choosing what to eat, or rather what not to eat is traded for eating whatever they choose.

Finally we’re here at Other Specified Feeding or Eating Disorder (OSFED). This diagnosis doesn’t have specific criteria that an individual can meet, but is characterized by a lack of part of another diagnosis’ criteria. Let me explain. Atypical Anorexia falls under this diagnosis, but is anorexic behaviors without meeting the low weight criteria. Purging Disorder also fits under this diagnosis – bulimia’s compensatory behaviors such as vomiting or excessive exercise without the binge eating beforehand. Another example would be Bulimia Nervosa (of low frequency and/or limited frequency) which is BN without meeting the criteria of engaging in behaviors less than once a week and/or for less than 3 months.

This is perhaps the most dangerous of the four due to it’s perception amongst individuals experiencing any eating disorders. Individuals with OSFED have been stigmatized amongst the Pro-Ana communities as “wannarexics” as they did not fit the diagnostic criteria. This can trigger a competitive response in which the individual steps up their behaviors in an attempt to be taken seriously. In addition, in a society where AN is praised – as much as any eating disorder can be praised – OSFED is less than, and individuals often do not feel like they can ask for help or be taken seriously by medical or mental health professionals. Historically, it has been harder for medical and mental health professionals to see the severity of their symptoms when they don’t fit the diagnostic criteria of other eating disorders that society has seen as “worse”. People are falling through the cracks and that can be deadly.

What we know about eating disorders is that often, it’s not a weight issue entirely. Trauma often plays a role in eating disorders, and the behaviors can be a way of coping. For example, if someone is sexually abused or assaulted, they can often develop an eating disorder as a way of taking back some control. Either by gaining weight so they are no longer “attractive” or losing weight so they do not appear “sexual”, they are controlling what they can and preventing further assault. As another example, a child who is being raised by very controlling parents can utilize eating disorder behaviors as a way of controlling what they can. Treatment can vary, depending on severity of the needs of the individual. It can range from inpatient services, to a mix of services provided by outpatient therapists and medical doctors, to work to registered dietitians. Family therapy has also been proven to be effective in some cases. If you or someone you love is dealing with an eating disorder, please reach out today. Counseling can be an excellent place to start.